Nanotechnology is a modern scientific and technical direction of working with matter at the level of individual atoms, which allows much deeper use of the potential properties of materials, and the use of new technologies for most aspects of human life.
Achievements in the field of nanomaterials and nanotechnologies open up new opportunities for increasing tens of times the technical characteristics of security systems and are essentially innovative, since they are aimed primarily at creating new products that are in demand on the security system market.

Today, nanotechnology is the most funded research field in the world. The influence of nanotechnology takes on a global character, changes the economy and affects all aspects of everyday life, work and social relations.

World science has proven that virtually any substance in the nanoscale state acquires new unique properties.

The emergence of new materials with unique properties has always played a large role in the history of civilization, performing not only narrowly production functions, but also social ones. It is enough to recall the cardinal differences between the Stone and Bronze Ages, the century of steam and the century of electricity, atomic energy and computers.

The prefix "nano" (from the Greek "nanos" - a dwarf), means one billionth of a share. One nanometer is one billionth of a meter, the ratio of nanometer to meter is the same as the ratio of the size of a penny coin and the globe. In ordinary speech, the prefix "nano" is used in the meaning of "relating to the nanoscale range" or "relating to nanotechnology."

Comparison of the scale of micro- and nano-objects 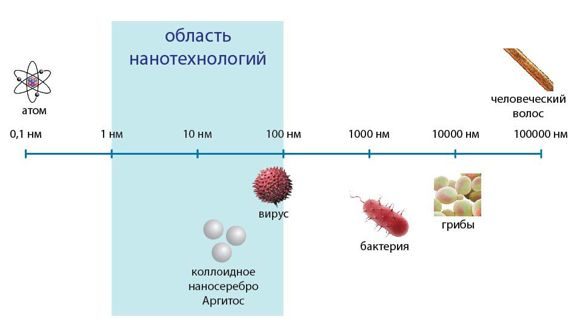 The fundamental difference between nanoscale particles and ordinary objects is that the surface area of ​​such particles is extremely large in relation to their volume. Such particles occupy an intermediate position between true solutions and ordinary objects. Their behavior, due to the highly developed surface, is very different from the behavior of both true solutions and melts, and objects of the macrocosm. As a rule, such effects begin to play a significant role when the particle size lies in the range of 1-100 nanometers.

Nanotechnology in the production of nanosilver

The advent of nanotechnology has made it possible to improve the “ordinary” colloidal silver preparations, reduce the cost of their production, and completely abandon toxic ionic silver. Nanotechnologies make it possible to obtain nanosized particles of silver with a specific, predetermined shape (spherical, plate, rods, etc.). Studies of the last two decades have shown that silver nanoparticles have stronger biocidal properties than ordinary colloidal and ionic silver, which allows, without reducing the biocidal properties of solutions, to reduce the total silver content in them.

With the invention of nanotechnology, scientists around the world have openly begun talking about the return of the Silver Age.

Scientists have invented a new revolutionary form of silver - a colloidal solution of nanoparticles, which contains silver in a neutral state, is safe for the human body and is more effective than all its historical predecessors. Thanks to advanced nanotechnological developments, nanosilver has become available for widespread use.

The effective antibacterial action area of ​​only one gram of nanosilver can reach several hundred square meters and, under certain conditions, maintain the “bacterial purity” of the treated surface for a long time.

Colloidal nanosilver is the safest and most powerful natural antiseptic for the human body, suppressing more than 650 types of pathogens, including staphylococci, streptococci, bacteria dysentery, typhoid fever, tuberculosis, etc.

The drug is actively involved in reducing vital activity and stopping the reproduction of bacteria, viruses, fungi and parasites alien to the body, and stimulates protective mechanisms. However, it does not affect the friendly microflora of the body. Pathogenic bacteria and viruses die from contact with colloidal nanosilver.